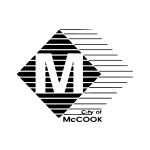 Create an Account - Increase your productivity, customize your experience, and engage in information you care about.

The bicycle patrol is one of the McCook Police Department’s newest programs. Policing by mountain bike got its start around 1987 in Seattle, Washington, and has proven its effectiveness in many law enforcement agencies across the country since that time. Many larger agencies have developed a dedicated bicycle patrol unit where officers are assigned to bikes on a permanent basis. Smaller agencies have also adopted the idea as well, but on more of a part time basis.

The McCook Police Department utilizes bicycle patrol as an added tool which allows patrol officers certain advantages and flexibility when investigating criminal activities and meeting the needs of the city’s citizens. Bicycle patrol is not a separate unit within the department, but it serves as a supplement to the patrol division. The department has two multi-speed mountain bikes that are available to officers that have completed a bicycle patrol training course. The officer still has a cruiser assigned and available, but also has the bike to use at their discretion.

Areas that bicycles can be particularly effective include: